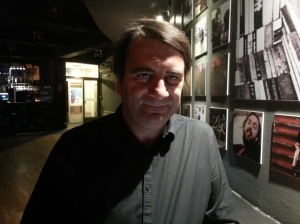 Marjan Nećak is one of the rare local artists that has experience equally in music and theater. His last performance, as a director was a Slovenian-Macedonian co-production. On this occasion I met with him during the latest edition of the Youth Open Theatre Festival in Skopje. He gave me that impression of a somewhat regional spirit, maybe because his father is from Croatia.

– You have a large experience with music. You worked as music illustrator and as  composer, as well. Do you understand your performance we just saw – “The Little Wire Girl” – as a continuation of your music opus? Do you think that the future of theatre is some kind of syncretic form which is a merger of music, projections, visuals, the modern forms that originate from the new media (like Internet) and technologies? Of course this is not a new tendency in the history of theatre…

The style I have been working on in this performance and that inspired me, some 10 years ago, is the music theater. Music theater means that the meaning of the dramatic piece and the music are on the same level. As much as the text and the dramatic piece are important – the same should apply for the music, or its incorporation in the text. The style of the music is not important; the interpolation of the music and text is important. I am in this “media” as I told you before 10, 15 years already, in many ways. Mostly by inspiring myself in that new music theater, or as many call it – the new opera. In this categorization I am referring to my experiences I had in Belgium and Holland. I wanted to transfer the knowledge I obtained there here in the Balkans; in spaces where the soil for this already exists in many ways. Since not everywhere we can find actors that have enough musicality. The Slovenian National Theater Drama in Ljubljana (the theatre I worked on my last performance “The Little Wire Girl”) is known for its highly professional, musically talented actors. That is why I decided to work this text with its particular theme exactly in Slovenia, because this is a country that is in Europe but also a part of the Balkans and the story we live in here(us that are a bit Southern) in a little different way.

– What is the professional discrepancy between the theaters in Europe and in the Balkans and why does that difference exist?

This kind of question is too difficult to be answered. The difference is not in the talent. There are talented and not-talented people here and there too. It is all about how the actors’ profession is perceived here and elsewhere. Unfortunately in our country people are working more and more in a perfunctory manner. With fast and skin-deep working, we are all unable to achieve any substantial result. Nobody works with dedication and professionalism anymore. The examples of the opposite kind are too rare. The difference between the professional and amateur work is too big, because the actors are not the only ones that are working on a theatrical project. The audience is important too, the tone, the video etc. So the Slovenians are far ahead of us in any manner – in the way how they percept the video, the tone, the technical aspect… So technologically we are far behind and we, as a country, are not investing anything in it, although now technology is much cheaper than it used to be. I estimate we are about 20 years late in everything.

– I think the problem number one is our neglecting of the audience, although we are speaking about this issue at least.  I remember we used to educate the audience. There were always free tickets for interested high-school students. That is how we had generations of formed theatrical audience. On the other hand, the invited ones have no interest in theater. Now they don’t care about these issues at all… What is you impression of this?

My impression is catastrophic and defeating. Because the audience is formed after the 5th or 6th year of age. So we must incorporate one person in the theatre audience from the time he/she begins to go to school, with a cultural approach. No matter whether it is theater or any kind of other art. I think that regarding this issue we already have a gap of some 20 years. It is true that in the past we had a strategy for this. Regardless of the fact whether it was a performance for the children, for the youth… They were attending and they were educated. Now we wonder why there is no audience. It is because the supposed audience doesn’t know what theater is, in any manner.

– How will you comment the situation of the Macedonian classics? There are some internationally significant names that were never (or shortly) staged in Northern Macedonia. On the other hand there is always money for the plagiarists, the average artists that are superior collaborators of the secret services and the underground… Such is the case of, for e.g. Boris Vishinski, the most translated writer in ex-Yugoslavia, even more than Ivo Andrich. His play “Girl” has scenes in which the time goes backwards. He wrote this many years before “Bedrail” from Harold Pinter. Is this connected with the fact that our film, visual media and theatre education are very much neglected?

Of course, I believe that indeed there are good writers. Regardless of the fact that here the producers (or the theater directors) don’t give chance to the authors – the young, the middle-aged or to the old ones. Somehow they all want to do something secure, they don’t want to take the risk. Or if they risk, they don’t risk enough. So if we don’t see the students or the dramatists that finished their education – few years up till 10 years afterwards – to see their works on stage – they simply will not become play writers. Because their works were never staged and they never had the opportunity to see their works on stage. So they are staging the classics or something that is very well known that seems like an assured possibility…

– I have an impression the directors never ever read any texts, for example in the last 10 years “Romeo and Juliet”, “Macbeth”, “Life is a Dream” were staged up to 6 times…

Exactly. Though I wouldn’t say this was always done intentionally. Many times it was a coincidence. However this is true, because our country is too small to be enslaved by staging same plays all the time. For a country like ours it is unproductive to follow the trends. If one play is tangible in UK or France, it’s not necessarily also here. We should educate the audience according to our local ambience, local life, what goes well with us and what doesn’t. Theater is not lemonade.

– I see you are excellent as a play-writer too. What are your plans for the future? Do you plan to write something else? I think this is your most successful project…

I had no intention to be a co-author of the text. Simply Maja Hrgović, who got the offer to write this text, asked for help from me, because we discovered that when together, we are creating far quicker, efficient and better. I don’t see myself as a writer. I am the one that always wants to engage myself in a dramaturgical manner. I am just always looking forwards hoping that it is some new kind of theater. Now I am working on something that is similar to this, and is very popular in England. Though the form is a bit freer. It is about a band with few actors. The story goes on the stage and says- good evening and the character retails his private dossier-“let me tell you my story.” This interests me a lot. I have seen in last few years many performances in this manner. This will be my future stile hopefully.