Macedonian denars. A closer look. (e.g. I searched what does that peacock on a 10 denars bill mean)

For me, the daughter of a passionate numismatist, one of the first things to be done after arriving to a new country is to get acquainted with the local currency. Since national currencies has always been an exciting and interesting topic for me, I did some extended research. If you never knew (or even noticed) what is shown on Macedonian denars, keep reading.

Let’s start with one of the most common banknotes that can make your wallet bloat like my stomach does after every single visit to my grandparents. 10 denars banknotes were issued in 1996 and often look rather old and time-worn. I still find them beautifully colored and designed. In the front of the bill on the right side you can see a torso of the Egyptian Goddess Isida, the mother of the nature who rules from the underworld. She’s the comforter of sufferers and calms storms. Long long time ago the sculpture was imported to Ohrid, then known as Lihnidos. On the left side, framed in a triangle, a crescent shape golden earring is pictured. It was discovered in Berantsi (Bitola), in a grave dating from the IV century B.C.

As you flip the banknote you’ll notice a colorful peacock. It’s a detail from the floor mosaic from the baptisteries of the Episcopal Basilica in the ancient city of Stobi. The peacock, a bird of the paradise, drinking water from cantaros (the source of life) symbolizes the believers craving for the Christian religion, mental peace and tranquility. The same mosaic fragment is engraved on the reverse side of 10 denars coins that were introduced in 2008.

50 denars bills are one of the rarest, as from what I’ve seen. Printed in 1996 they are almost entirely replaced by 50 denars coins. The banknotehas a lot to show, though. On the front side a copper follis is pictured. In 498 the monetary reform by Emperor Anastasius was made to eliminate inflation and monetary chaos in the eastern part of the Roman Empire. The uncontrolled minting of copper coins was stopped by introducing a new constant weight of a copper follis which was exactly 9.10 grams. The follies were made with letter M, letter K or letter I printed on them, meaning different values. Above the coin a picture of decorative stucco ark can be seen. This is the frame for a fresco of St. Panteleimon, the patron of a church in GornoNerezi (Skopje). The church was built in 1164 and contains magnificent frescoes. 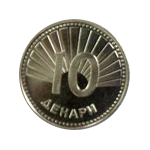 On the reverse side of the bill, again, a fragment of a fresco is seen. It shows Archangel Gabriel. The original fresco can be found in the church of St. Ghiorghi which dates from early XII century and is locaded in Kurbinovo, near the Lake Prespa. 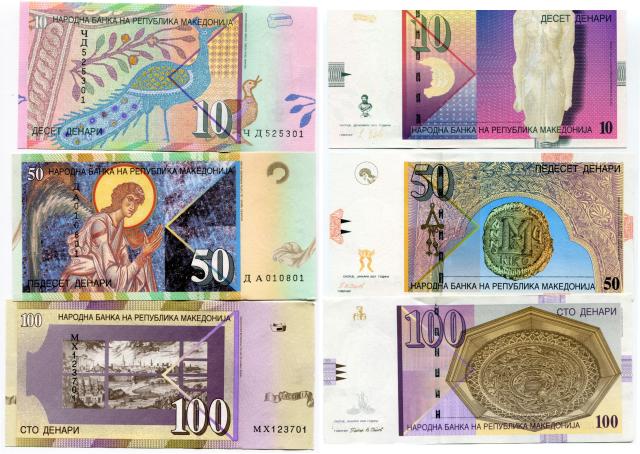 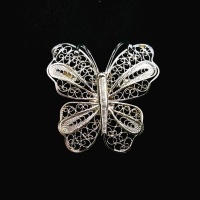 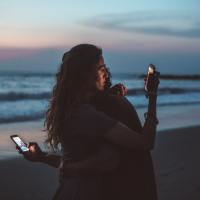 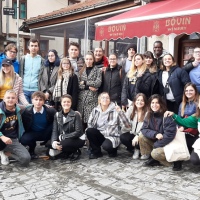