Weird title in this time of the year, huh? But true, in Iran we use a different calendar. It is called The Solar Hijri calendar; we’re in the year 1394 and getting ready to celebrate the New Year, 1395. It begins on the vernal equinox and is based on the orbit of the sun around the earth. Each of the twelve months corresponds with a zodiac sign. The first six months have 31 days, the next five have 30 days, and the last month has 29 days in usual years but 30 days in leap years. The present Iranian calendar was legally adopted on 31 March 1925 and it is used in Iran and Afghanistan The beginning of the calendar concurrent with the Islamic calendar, when the profit Muhammad, moved from Mecca to Medina in 622 A.C., but the difference is that The Islamic (lunar) calendar is based on the orbit of the moon around the earth. The first day of the New Year is the beginning of spring, it is called “Nowrooz”, no means new and rooz means day. The Solar Hijri year begins about 21 March of each Gregorian year and ends about 20 March of the next year. To convert the Solar Hijri year into the equivalent Gregorian year add 621 or 622 years to the Solar Hijri year depending on whether the Solar Hijri year has or has not begun. In the Iranian calendar, every week begins on Saturday and ends on Friday. In most Islamic countries, Friday is the weekly holiday. 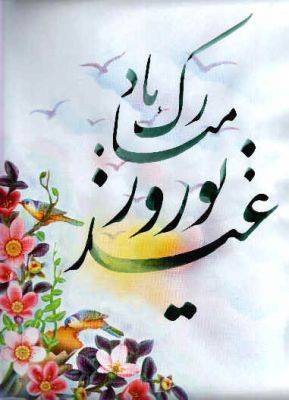 Before the New Year, on the last Tuesday night of the year we have a fire jumping festival, it is called Chahārshanbeh Suri, also festival of fire, it is a prelude to Nowruz, which marks the arrival of spring. It is an ancient Kurdish festival dating back to at least 1700 BCE of the early Zoroastrian era. Azerbaijani, Kurdish, Turkish, Afghani people and some other nations in the world celebrate it as well.

The words Chahar Shanbeh mean Wednesday and Suri means red. The celebration usually starts in the evening, with people making bonfires in the streets and jumping over them singing “zardi-ye man az toh, sorkhi-ye toh az man”. The literal translation is, my yellow is yours, your red is mine. This is a purification ceremony. This means you want the fire to take your paleness, sickness, and problems and in turn give you redness, warmth, and energy. 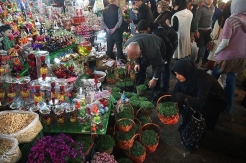 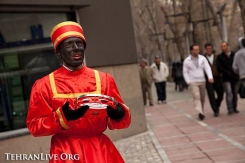 A couple of days before the new year Haji Firouz, a symbolic black faced disguised character wanders in the streets with his satin red costume singing and dancing, informing that the winter is gone and spring is close. The sound of his songs and the sight of his dance are often analogous to hearing Christmas music in a shopping mall, telling all that Nowrooz is in the air. 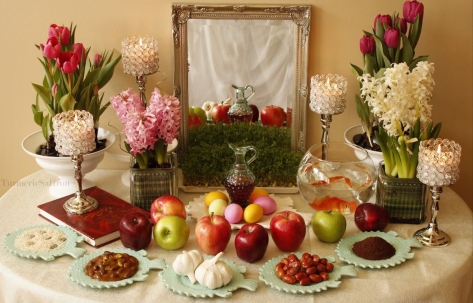 Then here we set a table instead of the Christmas tree, called Haft Sin, means there are seven objects starting with the letter “S”. Each of them is a symbol and contains a meaning. As you can see in the picture, Sabze, wheat growing in a dish (as a symbol of rebirth), Samanu, sweet pudding made from wheat germ (symbolizing affluence), Senjed, dried oleaster Wild Olive fruit (symbolizing love), Seer, garlic (symbolizing medicine), Seeb, apple (symbolizing beauty and health), Somāq,  sumac fruit (symbolizing the color of sunrise, with the appearance of the sun Good conquers Evil), Serkeh, vinegar (represents age and patience).

The beauty of Haft Seen is that it has all to do with nature and nothing to do with any religion. To reconfirm all hopes and wishes expressed by the traditional foods, other elements and symbols are also on the table):

Children enjoy coloring the eggs and helping their mother to set the table. During the last month of the year people intend to clean the entire house, cleaning the walls, carpets, curtains and so on. The fresh spring breeze is so pleasant while shopping in the streets and the sun shining, warming up the cold winter left over. I am sure if you pass by Iran in this time of the year you won’t regret it.

We bake cookies specifically for New Year, the most popular is chick pea cookies and we cook fish with rice and vegetables for the special meal.