Six countries and just one goal – spreading awareness for the NO HATE SPEECH movement around the world.

From 20th till 27th of May six countries including Macedonia gathered in Bansko, Bulgaria and worked day and night for one week to raise awareness by doing workshops and public actions. Around 30 people for Bulgaria, Macedonia, Estonia, Hungary, Norway and Portugal took part of this Youth Exchange and they used graffiti to express their concern about the problem with hate speech. 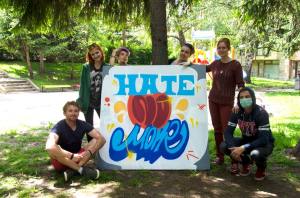 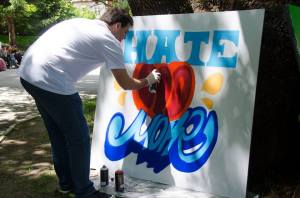 Each country had a team of 5 people including the team leader and the main objective was to find the main causes for different types of hate speech and of course the solutions. We covered hate speech against the LGBTQ community, hate speech based on nationality, race or religion, cyber bullying etc. Each country had the opportunity to share and explain the main problems they’re facing and then discuss on how to prevent it.

The fourth day of the project was planned for the public action. So on the 24th of May we went to Razlog, a small city near Bansko. We organized a public action to inform the local community about the problem with hate speech and also made a graffiti message to show that it can be efficiently used to combat hate speech. We chose this day in particular because it was a national day for the Bulgarians, so everybody was out on the streets and the town was crowded with people. We had volunteers with free hug signs, volunteers giving away leaflets, a “no hate speech” picture frame and of course a giant heart.

It was a successful day but we still had a lot of work to do and that’s why we divided ourselves in groups and as project’s outcomes, we made a short video and a newspaper which will promote the NO hate speech campaign, the idea of a peaceful way to fight against hatred though graffiti, the program Erasmus+ and the project itself.

Apart from the ongoing work we still found the time to get to know each other better and to party of course. For that purpose we had our intercultural night where we got the opportunity to taste different cultures and share ours with the others. We also had nights off where we explored Bansko’s nightlife. In conclusion this was a great project and the friendships  we made there are going to stay for life.