Magic of the classical music

The philarmonic orchestra of Macedonia was created on 24th November 1944 by the composer Todor Skalovski. Nowadays, the orchestra has 87 members

You comfortably sit in a red soft chair. In front of you on the stage, about 50 musicians are tuning their instrument in a pleasant hubbub. Sounds mix, people around you are whispering to each other, waiting for the concert to start. Suddenly, the light change. The musicians sit straight in their chairs. The public is silent. Finally, the conductor arrives on the stage and everybody applauds. Of course it’s not the kind of applause that you hear in a rock concert. Here, it’s polite and distinguished. The conductor greets the public and turns his face to the musicians. Silence again. The concert can start. The music is sweet and captivating, you feel good, like in a cocoon.

Symphonic Orchestra : What is it? The world of classical music and the symphony orchestra is a bit magical and sometimes difficult to understand. It’s a set of codes and rules, which may seem weird when they are new. Are the musicians positioned randomly? When should I applaud? Why this musician gets up and not the others?… We will try to clarify these questions and learn more about symphonic orchestra!

First of all, « symphonic orchestra » is the same as « philarmonic orchestra ». It’s a group of musicians composed of the 4 families of instruments : strings (violin, altos, cellos, bass), woodwinds (flute, clarinet, oboe…) , brass (trumpet, trombone, tuba…) and percussion (timpani, xylophone…). The orchestra is divided into several groups: the musicians playing the same part are in the same group. Each group has one soloist musician who has a special role : he has to play the solo parts of the score and direct the rehearsals of his group. Then, there is the “first solo violin” (or super-soloist). He has a hierarchical role and often represents the orchestra in front of its conductor and in front of the public : he welcomes and greets the conductor, commands the musicians to rise and he is responsible of instruments’ tuning. 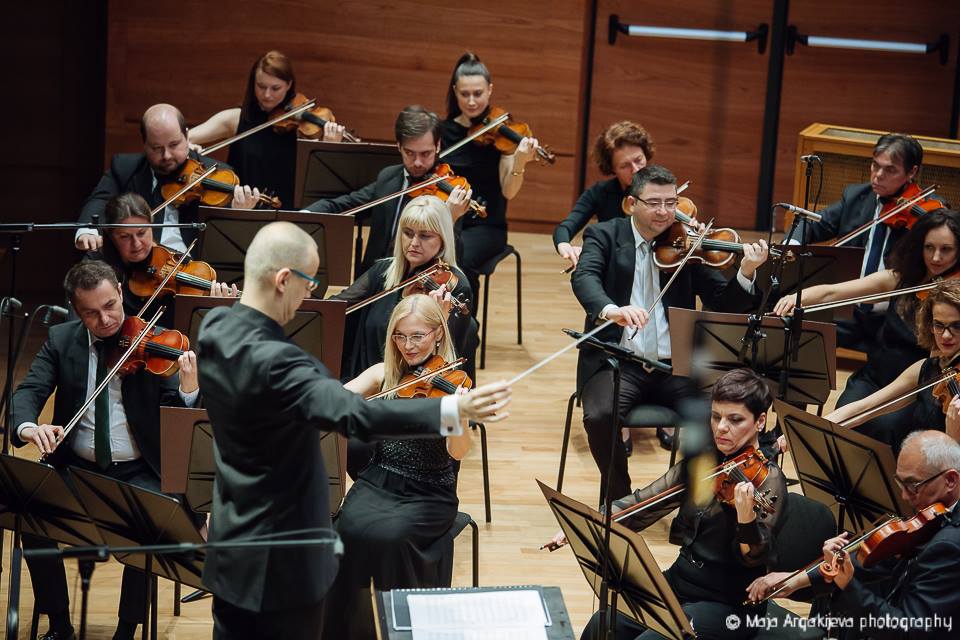 You can see a symphonic orchestra in different context: in a concert hall to play classical music or at the opera in the pit to accompany a lyrical performance or a ballet. Moreover, film music composers use the symphonic orchestras a lot! But be careful, during a concert of a philarmonic orchestra, there is an important rule if you don’t want to feel ashame: the applause. Most of the time during a concert, several people start to applaud and unfortunately this is not the right time: embarassing moment. So you have to know: during a concert, we applaud the performance of the orchestra only when the four parts of the symphony or three parts of the concert are finished. This is to preserve the will and the effect desired by the composer. Sometimes programs are distributed, indicating when the public is invited to applaud. Anycase, if you are not sure, and to avoid any misunderstanding, a simple solution is to wait for the others to applaud before starting.

Tina Ivanova is an assistant in production for the philarmonic orchestra of Macedonia, musicologist and music critic. She is comitted to all the texts published in the programs, on the website or social networks and to the communication with the media. She accepted to answer some questions to help us to know more about the functionning and the characteristics of this specific orchestra.

The philarmonic orchestra of Macedonia was created on 24th November 1944 by the composer Todor Skalovski who is one the pioneers of Macedonian music culture. He held the first meeting of a group of musicians in order to form a symphonic orchestra: the first state orchestra. He created the fundations of a large cultural institution, the first of its kind in the liberated Macedonia.

Nowadays, the orchestra has 87 members. Sometimes depending on the needs and the works that are being performed, some freelance musicians are engaged. But when it comes to employment in the orchestra, auditions are organized with and expert comission that decieds whether someone is suitable to be employed. In this institution, the main role is played by the house manager and the producers. They plan the concerts, determine the program, choose the soloists and the conductors. Then, all the dates of the concert season are determined and the program is published. Musicians are notified in advance about what they need to prepare. Usually, before each concert, there are three rehearsals and one general rehearsal, but if the program is more complex, rehearsals increase. The Macedonian philarmonic orchestra also plays outside Macedonia. They made several important tours in the wolrd: Oman, Zagreb, Sarajevo, New York, and in October 2018, they will perform in Spain. Many of the musicians who play in the orchestra also have an international career. Many of them play recitals, chamber concerts etc. They also perform as soloists especially in the region but also on European and world scenes.
Now that you know more about symphony orchestras and especially Macedonian orchestra, it’s time to go for a concert! The next one, on March 29, is dedicated to the 100th anniversary of the birth of American composer Leonard Bernstein. Its title is “Bernstein 100”. It will be conducted by maestro Timothy Redmond of Great Britain and the soloist is the leading cellist Nicolas Altstead. Do not forget to applaud at the right time and enjoy the music!