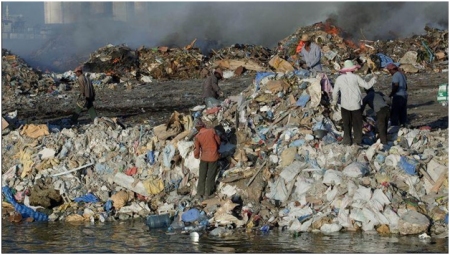 When I arrived in Skopje, the first thing I noticed on the streets was that there is a lot of litter and the garbage continents were full of waste. In the apartment I also saw that there were no sorting bins. I did not like the idea how the waste policy was applied. I thought that it’s bad for long-term solution.

In 2002 a new old policy was adopted on European legislation. The purpose of the novelty for the National Waste is to ensure a sufficient environmental policy, decision-making framework, economic basis, public participation and strategy. Setting up the technical infrastructure for wearing from the waste management operation implement the waste management system in EU legislation and with the sixth EU legislation Environmental Action Program (2002-2012). It is accounting for its priority in waste management, i.e. thematic strategy for the sustainable use of a thematic strategy on waste prevention and prevention recycling.

These are the European policies that we have based on:

 solving waste problems at source according to the “holder’s responsibility of generated waste”
 establishment of a separate collection and recovery
 system of valuable constituents in selected waste and end-of-life products according to the “producer’s responsibility principle”;
 utilization of valuable constituents of waste as a substitute for non-renewable natural resources and reduction of greenhouse gas emissions;
 gradual establishment of a rational network of waste management facilities for app. 8,7 million tons of municipal, industrial, agriculture, medical and other types of hazardous and non-hazardous waste, in particular by means of
• segregation of hazardous and non-hazardous waste fractions at source and their separate treatment and final disposal;
• improvement of MSW collection efficiency;
• disposal of all collected municipal solid waste on landfills previously conditioned or

 compliant with EU standards;
• priority start and execution of projects related to the management of high risk medical waste and animal by-product, and industrial hazardous waste;
• disposal of stabilized, non-reactive residues from waste treatment processes on landfills as the final goal;
• closure/remediation of existing non-compliant municipal waste dumps and remediation of contaminated sites and other environmental burdens;
• rational and environmentally safe use of land and protection of natural and cultural heritage.

In the new European waste policy of 2018 it’s hoping to encourage change to recycle 65% household waste and 75% of the packaging material in the cities of the European Union. The European Commission also wants that at least 10% of municipal waste will be deposited in landfills by 2030. Organic waste must also be compulsorily collected across the EU by the end of 2023. For example, the amount of food waste by 2030 should be halved. Reusable and recyclable by 2035, in practice this will help shift to a circular economy and make the EU less dependent on the import of raw materials by promoting a prudent, efficient and rational use of natural resources. If we approach this smartly then we can also create jobs. It is therefore not only good for the environment, but also for the economic growth and reduction of CO2. Landfill waste is almost non-existent in Northwest Europe where incineration plays an important role in addition to recycling. The dumping of municipal waste is still popular in eastern and southern parts of Europe. In 2005-2016 the land filling of waste is considerably less common during this period in Estonia, Finland, Slovenia, Great Britain and Ireland.

Now that I have been here for three weeks and have done some research, I see that there is a beginning. Sometimes I saw people who take the paper and/or pet bottles from the containers and take them with them, for recycling. There is indeed a waste policy, but it is not yet working properly and there is still a lot of work to be done, to make people more aware of it, and to do something about it.