How I will change society: Razvan Cîmpean

Razvan Cîmpean from Romania is a person who grew up in the city of Bălan, a city built around a copper mine that later closed and collapsed the city’s economy. He studies business administration and is involved in several projects through which he wants to promote tourism in his hometown. For a period of 1 year he worked in Germany but realized that he could not find his place there and later returned to Romania where he wanted to contribute to change. His passion is sports in nature, which started some time ago, when he started volunteering in an eco-sports NGO “Sufletul Hășmașului”, organizer of activities that helps young people to spend time in nature.

Razvan was selected for the project “European Youth at the frontlines of active citizenship: A Roadmap towards a collective South-North-East-West Momentum” organized by Volunteers Centre Skopje and supported by European Commission due to Erasmus + European Youth Together programme. 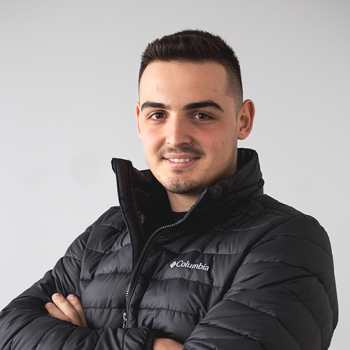 The problem he wants to solve in his project is the low level of interest of young people to play sports in nature, a problem that has as consequences the high risk of mental and physical health problems. his project consists in building a mountain biking route in the surroundings of Bălan. The partners are local authorities, local NGO volunteers and mountain rescuers. The challenge they face is to get help from local authorities to create a legal route.

He aims to contribute to the development of the city in the future and wants to motivate as many people as possible to do so, his message for those who want to become active citizens is to start change with small things.

Who are you and what project are you doing?
– I’m Răzvan Cîmpean, a young man from the city of Bălan and I’m involved in a project through which I want to arrange a mountain biking route to make sports in nature more accessible for young people.

Where do you get your passion for mountain biking from?
– My passion started as a child, I believe that mountain biking is a relaxing sport because it involves adrenaline and physical exercise, that helps me maintain my physical and mental health, also the surroundings of Balan favors mountain biking.

Why do you do a mountain biking route?
– I think that a well thought out route is necessary for the people of the city because they do not know accessible routes and do not venture by bike on the mountain, also the tourists with a route can visit the most beautiful places in the area by bike in a short time.

What problem do you want to solve through your project?
– I want to solve the problem of the low level of interest of young people to do sports in nature, this contributes to the increase of physical and mental health problems.

What impact will your project have on the young people in the city?
– Young people with this alternative will mobilize in groups to travel the route by bike, this sport will help them spend time together and socialize in a healthy way by increasing the level of mental and physical health. They will also be attracted to the surrounding beauty, making them happier in their hometown.

What activities will you do?
– Activities include a presentation of the project for teenagers from the city, an agreement with local authorities, arranging the route with the salvamont and finally inaugurating the route through trail tasting of cycle route.

What challenges do you expect?
– The challenge I face is to get help from the local authorities to register the legal route.