Animal rights is the idea that some, or all, non-human animals are entitled to the possession of their own lives and that their most basic interests—such as the need to avoid suffering —should be afforded the same consideration as similar interests of human beings. Advocates oppose the assignment of moral value and fundamental protections on the basis of species membership alone—an idea known since 1970 as speciesism, when the term was coined by Richard D. Ryder—arguing that it is a prejudice as irrational as any other. They maintain that animals should no longer be viewed as property or used as food, clothing, research subjects, entertainment, or beasts of burden. 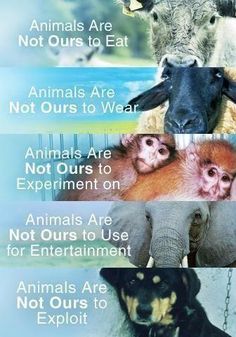 Abolitionism is the advocacy of animal rights that oppose all animal usage by humans and maintains that all sentient beings, humans or nonhumans, share a basic right: the right not to be treated as the property of others. The word relates to the historical term abolitionism—a social movement to end slavery or human ownership of other humans. Proponents believe that focusing on animal welfare reform not only fails to challenge animal suffering, but may prolong it by making the exercise of property rights over animals appear acceptable. The abolitionists’ objective is to secure a moral and legal paradigm shift, whereby animals are no longer regarded as things to be owned and used. Abolitionists want empty cages, not bigger ones. This is contrasted with animal protectionism, the position that change can be achieved by incremental improvements in animal welfare.

For thousands of years, Humanity has placed its heel on the throat of our fellow Earthlings.

We kidnap a baby elephant from her mother, break the child’s spirit with horrendous beatings, and parade her for our entertainment in a humiliating circus of slavery. We throw a fox pup into a filthy cage, where he spins around wildly in confinement-induced madness, and then electrocute and skin him to steal his beautiful skin. We pour burning chemicals into the eyes of a sweet bunny, as she shakes in terror and pain, to determine the “safety” of another cosmetic. We force a loving mother dog into a festering puppy mill, where she is made to pump out baby after baby, like a machine, for use in the slave trade we call “the pet industry.” And we brutalize a sad-eyed pig, by shackling and hoisting him into the air, as he cries out in terror and pain, before we slice his throat and turn his broken body into “meat.” 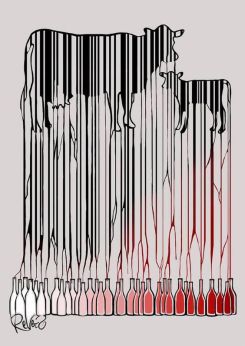 As a culture, we must open our eyes to the violence that is happening behind closed doors everywhere. We must open our eyes to the common feelings that all animals feel, the common fears that we all fear. After YOU have opened your eyes, help us make a better world by opening the eyes of those around you to our mission to create a better and different sort of world: A peaceful and beautiful world where the animals are liberated.

Animal liberation is a simple idea:  That every sentient being – black or white, gay or straight, dog or cat, human or rat – deserves the same safety, happiness, and freedom that we ask for ourselves. The movement is growing rapidly, as people of conscience tear off their moral blindfolds and see the raging violence against non-human animals for what it is: an atrocity.

Open your eyes, and join us at the frontier of social justice, for the greatest liberation movement in history.