I am in Pernik, a small town in Bulgaria, where the Surva festival has taken place since 1966. I am staying at the house of my friend Ina, who is a local and has been celebrating the feast since her birth. It is the last weekend of January, really cold but still sunny. We enjoyed a really nice breakfast which was prepared by Ina’s grandmother for us – mekitsi. This is hard to translate into English, but could be described as a fried dough covered with sugar powder, homemade jam and in the salty version even with white cheese. Maybe you have heard of this typical Balkan grandmother who is always concerned that her grandchildren are well fed so she is preparing different kinds of dishes. Well, she is one of them. We take a bottle of homemade red wine with plastic cups and go to the central square. 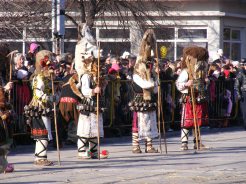 The opening is on Friday night and there is always a huge celebration including folklore singers, the typical Bulgarian (and not only) circle dance called horo, the typical Balkan barbecue which is spreading aroma everywhere, making sure that no one will stay hungry. The sky becomes colorful and full of lights because of the fireworks show. It is Saturday, the second day of the carnival. The whole town is out, lots of foreigners arrived just to see the spectacular carnival. It is connected with really old, pre-orthodox tradition. The participants in the festival are the so called “kukeri”.
“Kuker” is a person, mostly male, who is dressed as a beast, bear or some kind of scary figure, wearing a huge mask which could be up to 3 m tall. The whole costume is made of natural materials such as fur, skin, wood and feathers.

On their waist the kukeri have enormous bells called chanove. They have seven or eight bells which in total can weigh up to 20kg. They jump around so the bells make a lot of noise. In the kukeri group there are some other characters such as a bride (always played by a man), a bear, a priest. These characters usually stage a little play.
The contemporary festival in Pernik is arranged as a competition where a jury gives awards for the best costumes and play and the spectators can see it on the main square. Not only local groups can be seen but also “kukeri” from neighboring countries such as Serbia, Romania and Macedonia. Their costumes are not as heavy, and they don’t have the same enormous masks like the Bulgarians because they are travelling by bus from their countries and can only bring smaller equipment.
The festival is based on a tradition which takes place in the villages and include only one local group of kukeri. Every region has its typical costume. Some of them are only made of white, green, red cloth, some of them have huge feather masks, others look like giant bears. The group goes around the village, wishing health and happiness and performs a short play in every house. As a reward the people give them small gifts, mostly food. At the end they are playing on the square jumping fast so the huge bells can make their typical noise. The purpose of this noise is to chase the evil spirits away at the end of the winter as it is believed that otherwise they would harm the harvest in the next year. 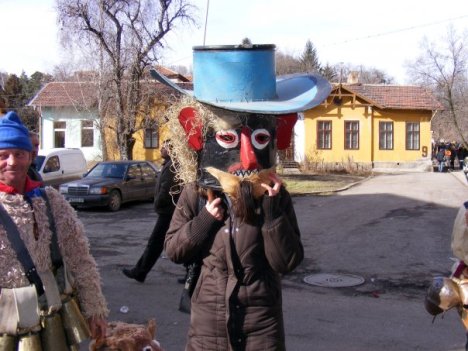 Most of the kukeri have their typical scary look like big teeth and angry faces but since nowadays Surva is a carnival based on a long tradition you can also see groups who are dressed like dolls, beautiful ladies and even minions from the “Despicable me” movie. A lady with huge feathers on her head dancing on a platform accompanied by music could be also seen and reminds me of the
famous Brazilian carnival.
The town is full of people, it is hard to find a café where we can have a nice warm drink during the cold festival weekend. Everyone is joking, dancing, having fun, being noisy and enjoying the sunny day. Some friends of Ina join us and we returne to the main square.
We are drinking homemade red wine on the square wand afterwards stroll around to look for a nice souvenir for me. People from all over the country are selling different kind of things – bee products, homemade jams, meat products, handmade jewelry and of course little kukeri dolls. We talked with a lot of the kukeri, they are really playful and energetic. To be a kuker can be quite hard since the costumes are really heavy, they can be inconvenient and even smelly. The preparation of the costumes takes really long time – right after this year’s edition of the carnival they start with the preparation of the costumes for next year’s edition. The style is similar but at the same time they are unique every year. It is a family tradition, you can see a father kuker with his little children dressed as cute little bears. We are standing next to some kukeri who are waiting their turn to go on the stage on the main square.
They have taken their masks off because they are really heavy. “Can I take a picture with you?” – I ask one of them. “Sure!” – he says and puts the kukeri mask on my head. Now I am officially a KUKER!