Have you ever thought who stands behind such a big success of humans like stepping on the Moon? Probably we all know Neil Armstrong, the American astronaut who was the first human to stand on the Moon, but we might not always think about many other people who were part of this big event.

Here we are with Margaret Hamilton, another great woman and such amazing achievement, which probably is not often mentioned and well known. And while talking about next NASA missions to the Moon or Mars, it’s good to remind her amazing contribution to one of the biggest technological successes which was landing a human on the Moon. 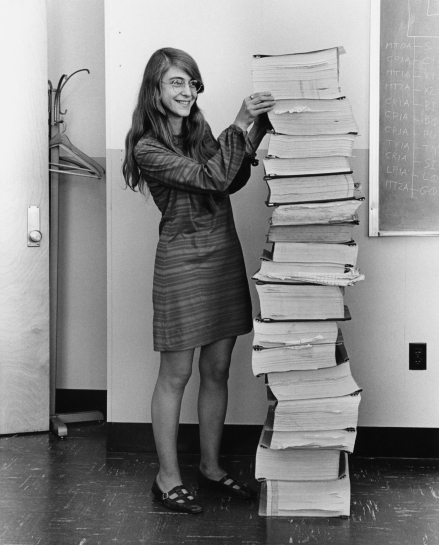 She was born in 1936 in Paoli, USA. Even though her career was rich in many different achievements, she became famous (or not) due to her crucial contribution to the success of humankind’s first step on the Moon. She was a director of the Software Engineering Division of the MIT (Michigan Institute of Technology) Instrumentation Laboratory, which developed the first onboard software for NASA’s Apollo mission. Someone might ask what it meant for the very popular Mission Apollo 11 and why was it so spectacular. Just before landing on the Moon, several computer alarms were triggered. It was displayed as an error that was never supposed to show up and which hid the priority alarms needed for a safe landing. However, this was something that Margaret Hamilton predicted while constructing her software system and thanks to that Mission Control could give the order to land. The astronauts could land and then Neil Armstrong could take the first step on the Moon. And it could become such a success because of many integrated systems all working together. She was part of many great projects after that as well, writing software for satellite tracking projects. In 1976 she co-founded a company called Higher Order Software, which main focus was to develop ideas about error prevention and fault tolerance in software. Ten years later she founded Hamilton Technologies, her own company.

Margaret Hamilton wasn’t only a software engineering pioneer. If we take a look and consider her life in a deeper social context, we can find out that it wasn’t very popular for women during those times to work and to have a career. That’s why Margaret Hamilton was also part of one of the very limited group of women, who decided to combine a career with family life, which she had. It must have been very unusual and maybe inspiring for people who surrounded her because Hamilton’s husband was working at Harvard University and like many other women, she was expected to serve at his side. In some interviews, she sometimes mentioned how she had been asked during those times why she is not at home with her children. And she would have said that everyone should take care of their own.

Someone could say she dedicated herself only to career, but no. During this very crucial moment of human history, she was a working mother. She dedicated herself to the role of mum but also to her dreams which she wanted to follow. She said that she wanted to be a part of the history. And she became it. What’s absolutely fascinating is her endless motivation and curiosity. History should never forget about people like her.

Together with Grace Hooper she was honoured by Barack Obama with a Presidential Medal of Freedom in 2016, which is the highest civilian honour in the United States. Moreover, she was awarded with a NASA Exceptional Space Act Award for scientific and technical contributions with the highest financial award ever gave by NASA.

There are still many countries, where women are victims of social systems, where they are not allowed to follow their dreams, where their education is limited or where cultural expectations win with individual desires and dreams. That’s why there should be a significant place for women in history, which they were part of. The history, which reminds all little girls and little boys that they can follow their dreams and be part of the world’s development, no matter their sex or social expectations.