KRATOVO: THE CITY OF TOWERS AND PASSAGES 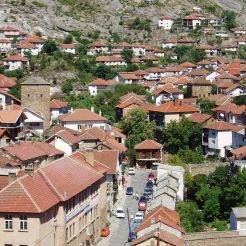 Amongst the tourists Kratovo is one of the most talked about cities in Macedonia. This is so mainly because of its towers and passages. As regarding the towers the art historians think that out of 12 remained 6 of them. It is not quite clear when were they built but according to the architectonic style and the ornamentation historians mainly agree that the towers were built during the Turkish rule. All the towers have their names such as the Emin Bay, the clock tower, the Zlatkova, the Simikjeva, the Krsteva and the Hadzi-Kostova tower. From them all the most magnificent is considered to be the Simikjeva tower, located in Dolna Maala district, built in the 1370.

Very attractive for the tourists are the passages as well. They seem to originate from the antique times. Some linguists think that Kratovo was firstly mentioned in the Homer epos of “Iliad” in the 6th century BC. As prove for this can be used the coins of the king Adolion Paionic who ruled in between the 315 and 285 BC. In this period Kratovo was trading with gold, silver and copper. Later in the roman time the city was known under the name of “Kratishkara”, and was then a part of the roman province of Dardania. Subsequently in the byzantine time this city was mentioned under the names of “Koritos” or “Koriton”. These names probably originate from the geographical position of the city that is like a trough. During the antique and the middle age period Kratovo was significant for its mines. The remains of this mines, with their beneath the ground tunnels and passages are some of the most visited spots by the tourists.

In the Middle Ages Kratovo was significant for its Kratovo Literary School. This was one of the most active schools, together with the school of the monastery of St.Gavril Lesnovski, in the period between the 12th and the 14th century BC.
Placed on the banks of the Kratovska Reka (Kratovo River) in the north-eastern part of Republic of Macedonia, Kratovo is a modern city and well connected with its infrastructure. It is positioned on the M2 highway that connects it with Kriva Palanka and Bulgaria and with Kumanovo and Skopje as well.